In the fall of 2014, after a successful summer of pastured poultry, we decided to re-invest our earnings into further diversifying our family farm.  A greenhouse seemed like the next logical step.  I decided to do a google search of different greenhouse manufacturing companies like Rimol in New Hampshire.  We felt the prices were a bit outside of our price range and then we happened upon a “choosing the right greenhouse” article on ACORN.  This set the ball in motion to purchase our greenhouse from http://multisheltersolutions.com. 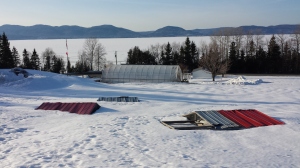 Greenhouse and pastured poultry pens on a Sprinter day

We decided to strategically place our greenhouse close to dad and mom’s house.  We leveled a large mound of topsoil to fit the dimensions of our greenhouse, 52′ long x 2o’ wide.   The topsoil had sat there since 1986 when it was removed from the site of where my childhood home was built.  I know, providence, right? This location would allow us to have a water supply, future connection to the grid, a prepped planting site, and the green house in direct view from the home. A small bulldozer leveled the topsoil to dimensions slightly larger than green house frame. 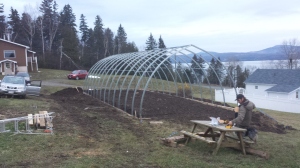 Let there be dirt…beneath greenhouse plastic

With pick axe, I dug out the trenches to place the 6″ x 6″ pieces of cedar.  It took a fair amount of digging and readjusting but I took the time to give the greenhouse a proper base.  Each 6 x 6 was anchored to the ground by using two T-posts per length of 6 x 6. Using a maul, the T posts were hit into the ground at an angle to help resist the lifting force. The soil was leveled and tamped.  Before moving on to the next step, we checked for square by pulling tape on diagonals.  They were within a couple inches of each other.   Success! We installed the base brackets at 4′ widths, starting the first a couple inches in from the end.  It was helpful to use a socket in our 18 V power drill to accelerate screwing the lag screws to the sill.  Once this is done, it becomes increasingly difficult to do it alone.  Thankfully, Jon helped attach the ribs/hoops to the ridge frame.  Having a set of scaffolding positioned beneath the ridge, helps with speed screwing the hoops to the ridge and the ridge to the ridge connectors.  I should mention that I used ratchet straps coming off the end hoops to plumb the hoops.  This is absolutely necessary to avoid problems with your end framing and should be done before a few set of hoops are erected.  We taped each ridge connection and filed off a burr or two as we went. 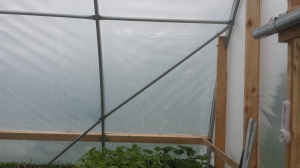 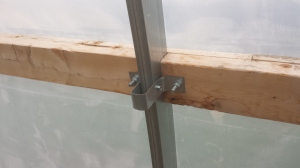 Brackets for roll up side

Finished? Not even close. We continued to follow the manual provided by multishelter solutions and tackled the purlins next.  We did not order cross ties, as they were not recommended, but purlins were a must.  These four bars, two on either side, spanned two sections of hoops starting above eye level on the corner and angling down towards the base.  The rigidity of the structure increased significantly from this point.  (Purlins are meant to counteract head winds that blow against the ends.)  With this step covered, the most time consuming step, in my opinion, was next. We ordered roll up sides so that meant cutting lengths of two by four to fit between the hoops.  The hoops are secured to the frame using brackets similar to the base brackets.  Speed screw from each side into the side of the hoop to secure the 2 x 4.  Once this is done, screw pieces of 1 x 1-3/4″ strapping along the top of the outside of the length of the side mount. 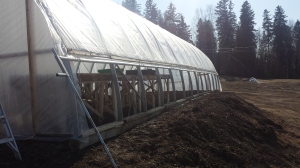 Roll up the side 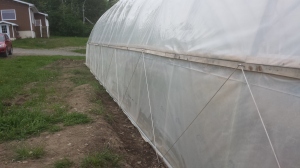 South side, sunny side.

Instead of using wirelock, we decided on using some of our strapping that we had cut off the farm in an effort to reduce costs. The plastic installation followed.  I would have preferred to have done this in the fall, however, given our heavy snowfall winter, it was probably best that we waited until Spring, slushy Spring. We decided to call in some Fofs, friends of the farm, and we had a new-fashioned greenhouse covering.  Or something like that.  A group of 7 mild-mannered and helpful people was exactly the right amount of people to secure the plastic.  We began by unrolling the plastic alongside the length of the greenhouse, tied each end with lengths of bailer twine that we tied together and then, in a zigzag motion, slowly pulled the first cover over the hoops.  We temporarily secured the plastic to the base at 3 points on each side of the length of the greenhouse.  First, we installed a piece of wire lock on both sides of the end hoops to secure the plastic lengthwise. The wire lock tracks, previously installed prior to pulling the plastic over the hoops, allows us to zig zag feed the wire into the track to tighten and secure the plastic.  The next step involved pulling the second layer of plastic over the hoops, but not as taught as the first layer.  Using strapping, previously preset with screws, we fastened the strapping to the 2 x 4 side mounts the entire length of the green house on both sides.  Using ladders, on uneven ground, I then set out to install the wirelock on the ends with the help of our FoFs. The roll-up sides had to be installed next.  Sections of galvanized piping are connected to run the length of the greenhouse.  The plastic is fastened to the pipes by being sandwiched between the pipe and aluminum pipe strapping with speed screws.  A series of screw eyes are installed in an alternating fashion onto the side mount and the base as nylon rope is weaved through them to keep the roll up sides tight to the hoop framing.  I have to say that this feature is an absolute necessity for regulating temperature and air flow.  Not to mention it gives our neighbours, human and animal, a chance to peer into the living world of the greenhouse. 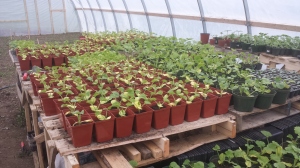 Getting pumped up for pumpkin planting 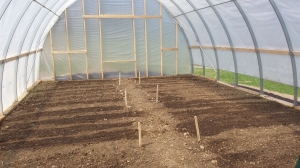 In ground direct seeding has begun

Today I found myself face to face with a diminutive emerald green ruby throated adult male hummingbird.  He struggled mightily to escape through the plastic so I used a spaded shovel to usher him to the end with the sliding door and eventually, after about 15 minutes, I was able to guide him to the open sliding door and see him speed away.  The roll up sides sometimes allow other members of the animal kingdom into our growing space so we close them during the cooler night time hours when some animals are actively searching for food.  On either end of the greenhouse we will be installing gable vents above the doors.  Our door on the east end allows me to keep an eye on traffic going to the farm and is positioned on the end with the prevailing wind.  We will be installing a door on the opposite end as well after we have landscaped and planted grass and perennial flowers along the sides of the greenhouse.  Shade loving plants on the north side, sun loving plants on the south side, and shrubs on the ends.  Our plan is to plant pollinator-friendly plants and flowers around the greenhouse to bring a vivacious buzz to surroundings. The overall plan of our greenhouse is to bring an improved aesthetic to the farm, grow food for our family, community, region, local school children, and supporters of local naturally grown food using beyond organic growing principles.  Sustainability remains the fundamental goal of our farming pursuits as we continue to diversify our operation as well as providing opportunities for future generations on MacCurdy Farm. 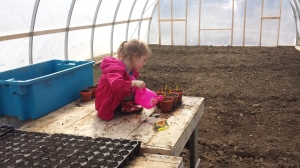 Hard at work on her own will